Introduction to Ian Christie’s ‘The Art of Film’. A book about John’s life and work. 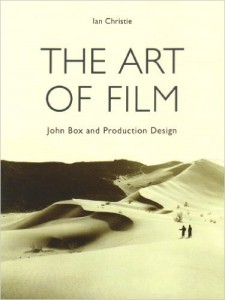 ‘John Box had one of the most continuously productive design careers in British cinema, winning a record four Academy Awards and four BAFTAs. After learning his craft in the 1950s, he shot to fame with Lawrence of Arabia (1962). Directors from David Lean and Carol Reed to Norman Jewison and Michael Mann have valued his experience, as he brought `a vocabulary of life’ to bear on the new challenges posed by each film. Whether creating China in Wales for The Inn of the Sixth Happiness (1958), revolutionary Russia in Spain for Dr. Zhivago (1965), or Dickensian London for Oliver! (1968), imagining the mythic past in First Knight (1995) or the future in Rollerball (1975). Box shaped screen worlds across five decades, helping to establish the traditions of British production design which continue today. His greatest wish was that his career should encourage others by example. Based on interviews with John Box and the co-operation of some of his key collaborators, this lavishly colour-illustrated book focuses on solutions to design problems and provides a unique insight into the production designer’s role in the collaborative business of filmmaking.’

‘John Box, who has died aged 85, was one of the cinema’s most respected and resourceful production designers. He used Wales for the Chinese countryside of Inn Of The Sixth Happiness (1958) near the beginning of his career, and 25 years later turned the same landscape into a mysterious Romania for Michael Mann’s The Keep (1983). In between, he filmed much of David Lean’s Lawrence Of Arabia (1962) and Dr Zhivago (1965) in Spain, when the original settings of the stories proved inaccessible.

Box’s career began at a time when British film studios were facing a postwar slump. But he was lucky to come under the influence of the redoubtable Carmen Dillon, working as assistant art director with her on such Anthony Asquith classics as The Browning Version (1951) and The Importance Of Being Earnest (1952).

A period in the mid-1950s with Warwick Films brought him into contact with American directors working in Europe, and it was one of these, Mark Robson, who gave him the chance to design the epic Inn Of The Sixth Happiness, starring Ingrid Bergman and Curt Jurgens. Two years later, he worked with Carol Reed on Graham Greene’s Our Man In Havana (1960), creating the Cuban capital at Shepperton studios.

The 1960s became what Box described as “the Lean era”, after he joined the ambitious project to film Lawrence Of Arabia, taking over when the original designer, John Bryan, whom Box revered, fell ill. In the next five years, first on Lawrence, then on the equally spectacular Dr Zhivago, Box forged a unique relationship with the demanding Lean.

After living under canvas for months in the Jordanian desert, sculpting sand dunes to provide the setting for Peter O’Toole and Omar Sharif’s adventures, it was Box’s idea to move to Almeria and Seville, in Spain, to complete the troubled movie. In 1962, he was rewarded with the first of four Oscars for its sweeping visual achievement.

Similarly, when it proved impossible to film Dr Zhivago in Russia, Box created another romantic world – memorable for such creations as revolution erupting in the streets of St Petersburg and the Vary- kino ice palace – in Spain. A second Oscar duly followed.

Box then returned to Britain for two films that tested his ingenuity in very different ways. Fred Zinnemann’s adaptation of Robert Bolt’s play, A Man For All Seasons (1966), was not a lavish production, though it required a convincing Tudor setting. As often, Box argued for economy as a style, making Orson Welles’s Cardinal Wolsey menacing in his cramped lair, while Henry VIII’s bounding arrival at More’s Thameside house anticipated Box’s own later residence overlooking the river at Barnes bridge. For Reed’s Oliver! (1968), Box turned to Gustav Doré’s engravings of 19th-century London, which he realised with exuberant colour and bustle, as well a sinister dimension, in an elaborate Shepperton exterior set gratefully used by later productions.

Oliver! and Nicholas And Alexander (1971) brought Box two more Oscars, but his work in the 1970s would take a more contemporary direction, as he created a jazz-age setting at Pinewood studios for Jack Clayton’s The Great Gatsby (1974).

Next came Norman Jewison’s futuristic Rollerball (1975), William Friedkin’s Sorcerer (1977) and Mann’s The Keep, all requiring the creation of a closed, highly charged world, with Box now a valued adviser to more youthful directors. Recently, Mann recalled how he “knew he was home” when Box showed him Piranesi engravings as the basis for the mysterious castle of The Keep.

There would be one last collaboration with Lean, on A Passage To India (1984), and two final period projects, Black Beauty (1994) and an Arthurian fantasy, First Knight (1995). First Knight also brought Box into the world of computer-generated imagery as an adjunct to set construction and matte work. But his heart belonged to the architectural tradition of film design, and he quoted with pride John Gielgud’s praise for the Camelot set at Pinewood as the most atmospheric he had known.

Although born in London, Box spent much of an idyllic childhood in colonial Ceylon (now Sri Lanka), where his father was a civil engineer; he felt this experience had shaped his vision of the world almost as much as later architecture studies at the North London Polytechnic and war service as a tank squadron commander. He received more honours and awards than any other member of his profession, including four Oscars, four Baftas and, in 1998, an OBE.

His second wife Doris, a costume designer whom he met when they were both working on The Black Knight, predeceased him in 1992; their two daughters survive him.