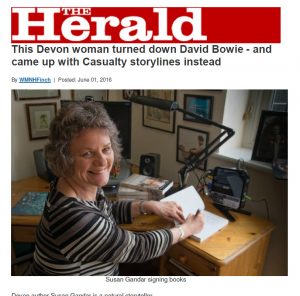 As a story consultant on Casualty – one of the BBC’s longest running dramas – she is used to grabbing an audience from the off. Now, Susan has published her debut novel, an enterprise that delves into her own past to bring the story to life.

Sometimes painful but also perfectly pitched, Susan is known for taking on the tough watch and she has a knack of getting it right. Under her steer, Casualty’s ratings doubled to 14million, saving it from the axe after series one.

She said: “My personal belief is that you never dumb down and always push the strongest story.”

Working on one of the BBC’s most successful dramas isn’t bad going for someone who turned down a university place to go into the BBC as a secretary. She went on to have a long TV career and even caught the eye of David Bowie, who offered her a job after starring in BBC’s Baal . “I happily turned it down,” she said, with a smile.

When Martin, her husband, was offered an IT international marketing role they moved to Amsterdam for two years. But she found that TV work ‘soon gave up on me rather than the on the way around.’

But the cloud had a silver lining, allowing Susan to pursue a new venture, trying her hand at writing a screenplay before penning her novel. Her debut novel, We’ve Come to Take You Home is getting great reviews and was called ‘powerful, intelligent and moving’ by Graeme Simsion, author of The Rosie Project. It tells the story of Samantha Foster and Jessica Brown who are destined to meet though they live four generations apart. The novel, written as a crossover for a young adult and adult readership intertwines one girl’s wartime horror and deprivation alongside the other’s heart rending family ordeal. By blurring the boundaries between reality and what lies beyond, Susan has embarked on a personal exploration of belonging and mortality – made all the more sharp since the sudden death of her mother Doris, aged 68, in 1992. 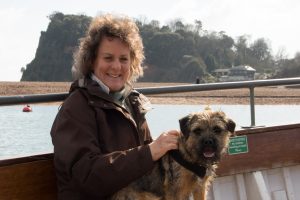 It was a stingingly painful time, but one that she was able to draw on when writing about the family relationship at the heart of her novel. When writing about the father of her character Sam Foster, who becomes gravely ill, Susan draws on the loss of her mother. She recalled how Doris was rushed to intensive care where she was treated for a brain haemorrhage after complaining of a headache. She died the day before the pair were due to fly to Venice. Susan explained: “I fell in love with Venice when Martin and I went there on our honeymoon. My mother had never been there so I wanted to share it with her.”

Susan said that she stayed true to the adage of writing about something you know. She said: “This experience was far enough away but not so far that I couldn’t remember how it felt.

“The most poignant thing for me in writing the book was allowing my character to take her father’s hand when he was lying unconscious in hospital. That was something I personally could not do. I knew my mother had gone, I instinctively felt that she was no longer there.” 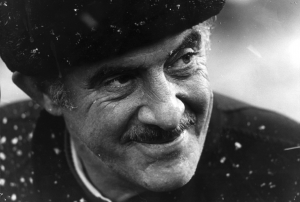 John Box on the set of Dr Zhivago

As the daughter of four times Oscar winner John Box and her costume designer mum, it could be said that Susan’s childhood was training for a career in the media. Susan recalls one of her birthdays, spent on the set of David Lean’s Oliver! watching the filming of the “Please sir can I have some more?” scene and she can remember crunching around in the fake snow in boiling temperatures in Spain during the filming of Doctor Zhivago. It was an upbringing that made her somewhat immune to the trappings of celebrity and perhaps made her just the person to look after David Bowie when he took the lead role in the BBC’s version of Bertold Brecht’s Baal in 1982.

She explained: “I think they knew that because of my background that if anyone could handle Bowie then I could,” she laughed.

She recalls that the star was decidedly cold. She said: “The aloofness was partly due to nervousness, even fear, as John Lennon had been murdered just over a year before. Bowie was concerned that the same thing would happen to him. Which I think was one of the reasons he took on the role of Baal – wanting to change his musical career, with all that went with it, for an acting career. 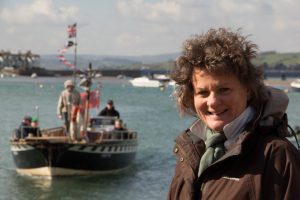 “I worked with him for six weeks and I can honestly say that I didn’t take to him but I definitely admired him.

“When he stood up in that BBC rehearsal room and sang for the first time it really did feel as though the world had stopped. It, his voice, his presence, was that powerful.”

She recounts one occasion when he used a BBC telephone for an overseas call to an auction house, bidding for a painting ‘that may have been by Picasso,’ she said.

Susan said: “When he put the phone down, he went to walk away without saying anything when I said: “Did you get it?, ‘Yes, he replied flatly and that was that.”

Susan was taken aback when his manager Corinne “Coco” Schwab, who she described as ‘delightful’, offered her a job – a position she happily turned down. She explained: “I didn’t say I’ll go away and think about it, I followed my gut and said ‘no thankyou’, I looked at the life that Coco had, following David around and I knew that I didn’t want to be at the beck and call of someone like that.

Susan’s father is one of only a handful of people to have won four Oscars. He was one of cinema’s most respected and resourceful production designers, creating the sets for iconic films like Lawrence of Arabia and Dr Zhivago. He used Wales for the Chinese countryside of Inn Of The Sixth Happiness (1958) near the beginning of his career, and 25 years later turned the same landscape into a mysterious Romania for Michael Mann’s The Keep (1983). In between, he filmed much of David Lean’s Lawrence Of Arabia (1962) and Dr Zhivago (1965) in Spain, when the original settings of the stories proved inaccessible.

Susan said that the ‘extraordinary was ordinary’ during her childhood, with her mother wading through piles of scripts on the kitchen table before recommending them to her father. But life was far from easy as her father would often go away for years at a time, leaving Doris, who he met on the set of The Black Knight, becoming increasingly frustrated at how small her own life had become.

She said: “Mum was a good costume designer, she had worked on the Marilyn Monroe films but she had to give up her career whereas his career ballooned.”

Susan said she remembers her father returning home for three days at Christmas while he was away filming Lawrence of Arabia for three years. Susan was just six years-old.

She said: “I knew my dad was coming home and I remember staring out of the window saying my Dad’s coming home. I saw this man walking down the street towards the house so I ran out to greet him shouting ‘Daddy, Daddy!’ but he didn’t react at all the way I thought he would, and I realised it wasn’t him and I had no idea what my Dad looked like.”

She said that her father was often distracted and at odds with his home life.”I think it would have been better if he didn’t come home because his head was clearly full of Lawrence of Arabia. It must have been incredibly difficult for him to come home to a child he didn’t quite recognise and a child that didn’t recognise him.”

Doris moved to Shaldon in Devon with her daughters and set up a nursery school. It was her way of finding a place in a community while her husband was away. And among all the glamour, it was the simple seaside life that Susan holds most dear.

She said: “My fondest memory is of us together as a family sitting on the green in Shaldon – my mum, dad, my sister, me and the dogs. Now, Susan works from her study in Teignmouth at the home she shares with Martin and nine-month old terrier Scruffy.

She has a view of Shaldon and the Ness from her study window. She said: “It’s beautiful isn’t it? We have been everywhere but nothing compares to this view.”I like to watch the ships coming in, it reminds me of all the holidays I had down here, with my family, together, as a child, and I know I’ve come home’.

We’ve Come To Take You Home, £7.99 is published by Matador and available via Amazon. http://lrd.to/wevecometotakeyouhome   further information at  www.susangandar.com